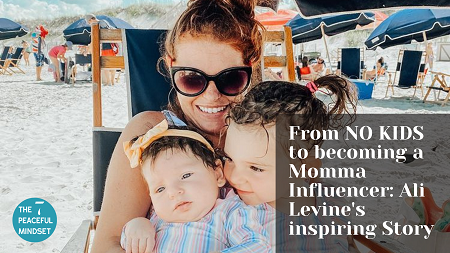 It looks like, work, commitment, focus, passion, and entrepreneurial spirit are in the blood of people born in July.

It may sound irrational to many but still, some real-life examples made me put this statement today.

July born Elon Musk is the Synonym of focus, work, commitment, and hunger for success.

Today, I am going to introduce to you another such personality for whom the passion for work is like lifeblood.

And she too belongs to the July gang. HAHAHA!!!

I feel proud and highly honored to share with you one of the inspiring real-life stories of a self-made woman.

I am talking about a proud Mumma and wife, celebrity stylist, reality TV star, and a lady with an evergreen smile, Ali Levine.

Today in this article, we will see her journey of becoming a stylist, a proud mom, and an inspiration to millions.

Who is Ali Levine?

In short, a lady with a super-strong winner mindset who never fears hurdles in life.

When it comes to styling, Ali Levine is among the favorite list of Hollywood celebs.

She may be a stylist to the world but simplicity is her biggest trait. This is why, this simplicity played the biggest role in shaping her life, profession, and her belief.

She was born and raised in New York and moved to Los Angeles to accomplish her dream of becoming a Stylist.

Her love for fashion and styling made her work featured in some of the world’s best publications and editorials including, The New York Times, USA Today, Envie, Vogue, Bello, and still counting.

Ali has added charm to the styles of celebs like Jesse McCartney, Lauren Bowles, Arianny Celeste, Oona Chaplin, and many more with chicness.

You will find her crediting her grandmother for shaping her career and love for fashion. She addresses her as a “kinship style icon” who has sown the seeds of fashion in her heart.

Ali Levine journey from NO Kids to YES Kids

Ali Levine never wanted to have kids in her life. She wanted to explore this world, meet new people, grow in her career, and accept new challenges.

She never wanted to be a woman packed in four walls doing household chores. For her, becoming a fashion icon was the top most priority in life.

Her life before becoming a style icon

She has seen series of hardships in her career, relationship, and as an individual.

It seems that her failure journey is very much inspired by the above quote and fits perfectly. She even lost her job and her clients after a stock market crash during the initial days of her career.

With never give up attitude and blood of a winner she stood strong for herself to explore unexplored paths to success.

“Confidence is your best accessory”, her life-changing mantra that she always repeats whenever she feels low.

It was the year 2010 when she stepped out to make a career in costume design and from here she never looked back.

She was so much excited to start her entrepreneurial journey. Ali could see in her imagination Hollywood stars shining with the chicness of her work.

She could imagine her work getting featured in the country’s bestselling magazines, newspapers, and TV channels.

With every flip of her book of imagination she was heading closer towards her dream.

She started meeting people, visiting places and did everything that could make her dream a reality.

The seed of her dream company was already sown and with the sprinkle of her dedication, this finally blossomed as the “Ali Levine design” at the later stage of her life.

Ali Levine turning her dream into a reality

Her company already started producing the country’s best designs and was shining on the shoulders of celebs.

With the power of imagination and her strong belief, she finally made it. Ali Levine’s design was no more a small name in the fashion industry.

The more happy faces the shiner her smile was becoming. This shine attracted more people and media houses from the glamour world.

She was becoming the talk of the town getting featured in world-class magazines and TV channels.

She had made her dream into a reality that she dreamt of in the year 2010. Holding her emotion everything flashed back in her mind and she could see her hurdles-filled journey.

She had everything that she wished but something was missing from her life and she did not realize it until she was featured in a popular reality show called “Stripped”.

She was so much occupied with her passion for work and growing her business. But somewhere she was missing putting the time in knowing herself even better.

Ali’s decision of not having kids was making her not enjoy the beauty of womanhood and motherhood.

A new journey: From a Style influencer to Mumma influencer

But this darkness lit another lamp of happiness that was left untouched.

That show has not only stripped her down materialistically but also stripped down her thought of not becoming a Mumma, and exposed her true feeling of womanhood.

The show has shown her way to becoming a proud Mumma and enjoy the essence of motherhood.

She decided to change her decision of not becoming a mom and begin her new journey of becoming a proud mom.

Ali wanted to feel the ultimate power of motherhood and womanhood.

With the change in her mindset, she got pregnant shortly after that show. Now, she is happily a proud mommy of two little angels.

She fell in love with this new experience of motherhood and wanted to share it with the world. Ali wanted to express this feeling of true motherhood with all the moms around the globe.

She was as passionate about becoming a mommy influencer as becoming a Style influencer. The same energy she put into spreading this awareness and influencing millions of moms through social media.

Her power-packed posts on social media like Instagram say a lot about her journey of becoming a proud mom and a woman entrepreneur.

Ali Levine with her power of motherhood proved again the unlimited energy she was born with.

She is not just a “style icon” but in a true sense a beautiful “motherhood icon” to the world.

A big salute to her courage, commitment, passion, and yes, her mothethood. 🙂

Peaceful Mindset is a knowledge hub of techniques, best practices, resources, books, and people that will help you tranform your life. We will introduce to you the best tactics, tips, books, influencers, great personalities, and about art of living a happy and peaceful life.

Your personal scale to unlimited happiness